University of Helsinki, each biobank, each pharma partner and Business Finland has the right to appoint one representative to the Steering Committee. Responsibilities of the Steering Committee include major strategic decisions and monitoring the progress of the project against the deliverables and milestones and the high-level objectives of the Scientific Plan.

Professor Aarno Palotie (University of Helsinki) has been appointed as the Scientific Director of the study. He is responsible for the overall conduct and output of the Scientific Plan.

Dr. Mervi Aavikko and Dr. Huei-Yi Shen have been appointed as FinnGen co-Project Managers and Dr. Risto Kajanne as FinnGen Project Coordinator. Dr. Mari Kaunisto is the Communications Director and responsible for the proactive public dissemination of the study.

Several teams consisting of close to 40 members have been established to take care of the execution of the study.

The chart below presents the information provided on this page in a graphical format: 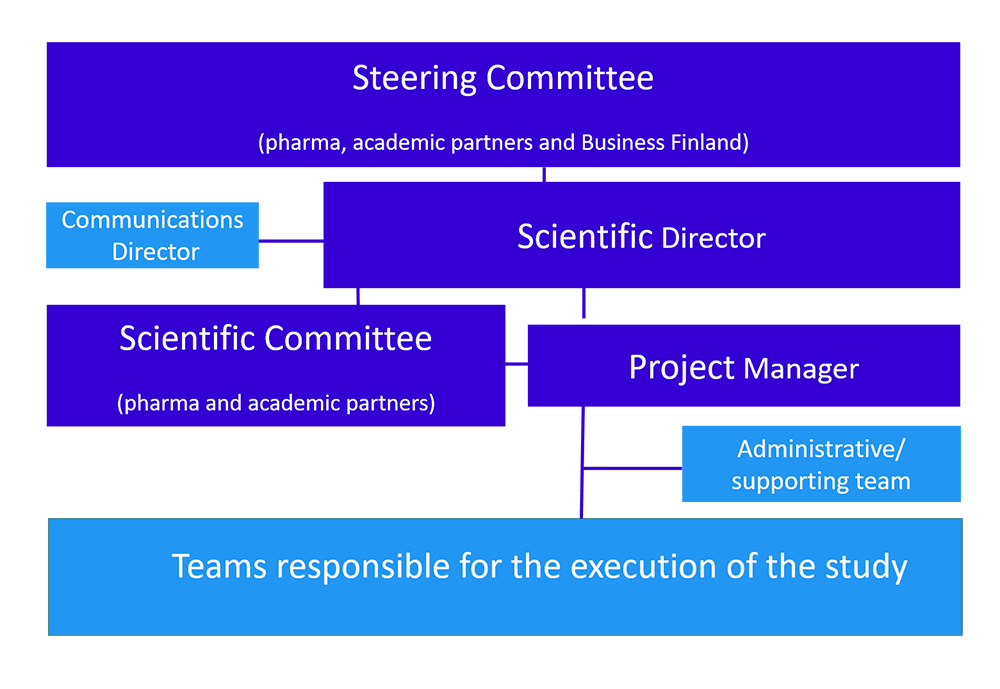 FinnGen is a large public-private partnership aiming to collect and analyse genome and health data from 500,000 Finnish biobank participants. FinnGen aims on one hand to provide novel medically and therapeutically relevant insights but also construct a world-class resource that can be applied for future studies.

FinnGen is one of the very first personalized medicine projects at this scale and the public-private collaborative nature of the project is exceptional compared to many ongoing studies. FinnGen brings together Finnish universities, hospitals and hospital districts, THL, Blood Service, biobanks and international pharmaceutical companies and hundreds of thousands of Finns. Because collaboration is the key to achieving breakthroughs in disease prevention, diagnosis, and treatment, we welcome everyone on this journey into our shared heritage.